Palma de Mallorca is one of the jewels of the Balearic Islands. There are regular ferry connections from Barcelona. The many attractions, markets, small restaurants and live music in the streets make it a magical place to travel to. There are also magical beaches and Mallorca has a vibrant nightlife to rival Ibiza. 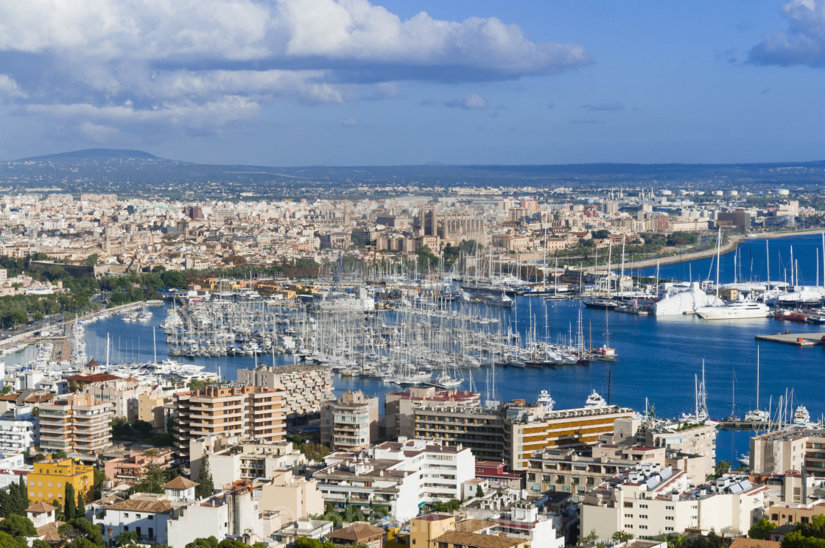 One of the finest structures of the Island stand the Palma Cathedral – La Seu. In the year 1229 King James I sailed to the Balearic Isles which was Muslim held. After occupying the region, he transformed the then mosque into what now stands as the Gothic Church La Seu, renown throughout Europe.

Originally built by the Romans in approximately 123 BC, the Almudaina Palace, also known as Palau de l’Almudaina, still stands as it was rebuilt and transformed into the residence of the Majorcan Kings. The blend of architecture and history of Moors, Muslim and Roman influence, attracts visitors from all over the world.

With its distinctive circular shape, Bellver Castle is a sight to behold. The Gothic Style Castle was built in the 14th century and is surrounded by a moat. It towers of the land looking down on the main town or capitol, Palma, which is over 3 kilometers away. 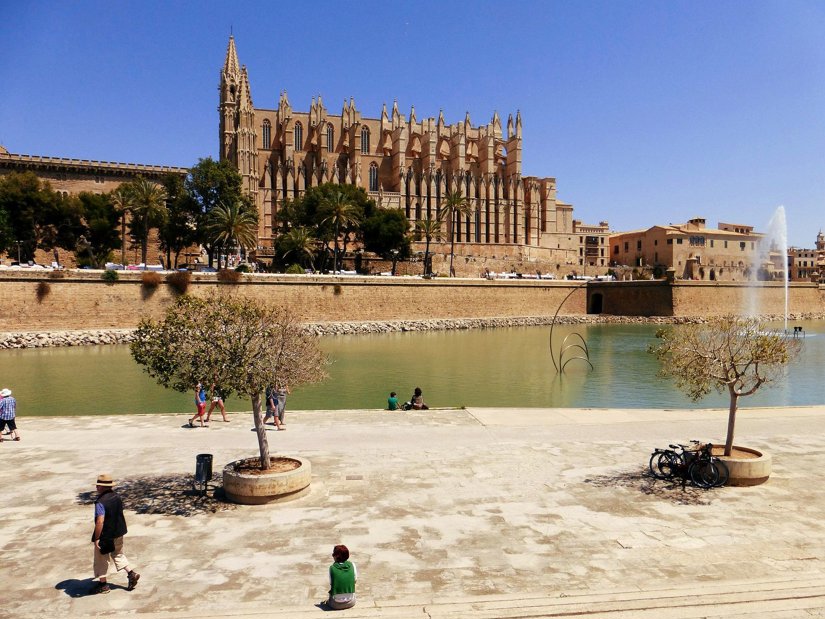 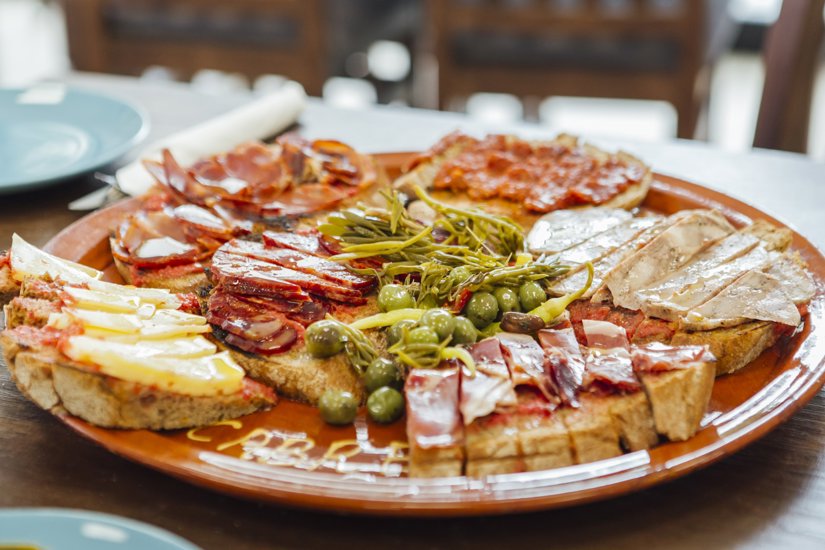 For breakfast the local dish would be offered as a set deal with Café con Leche (with milk) as well as a traditional Majorcan pastry called pa amb oli. This is a slice of bread which could be toasted or not covered with tomato seasoned with olive oil and salt. There are English Breakfast style restaurants and pancakes etc. available in the more touristic areas.

Lunchtime is normally between 1pm and 3pm and most local restaurants offer set or fixed menus called “Menu del Dia” for a set price which is 3 courses and a drink. Others offer what is called “Plat del Dia” which is a single course and a drink for those who are on the move. The lunches would normally cost between €10 – €25.

Late dining is the Spanish way so most restaurants do not open or seat before 7:30pm and some more traditional establishments will not open before 8:30pm. The local food on offer is quite various and it is also customary for the waiter to bring a liqueur known as a “copa”. Some places may ask if you would like one while most would simply bring one with your bill.

It is recommended that you make a reservation with most restaurants.

Cala Formentor Beach located in the north of Mallorca is a spectacular site especially in the early evening.

Es Calo des Moro Beach is located in the South of Mallorca and can be argued to be the most beautiful beach in all of Mallorca. As far as peace and quiet goes, there are no restaurants or bars here. It has a beautiful mystique about it and is maintained and cared for by a private company. The beach itself is not very big and one would have to traverse a rocky down climb to get there. Not far from it with a bit more space however, not as majestic would be Cala S’Almonia.

S’Amarador Beach is located in the Southeast region of Mallorca and is surrounded by rocky coves, sand dunes and forests. It is also worthwhile to know that the beach lies in Mondrago National Park. 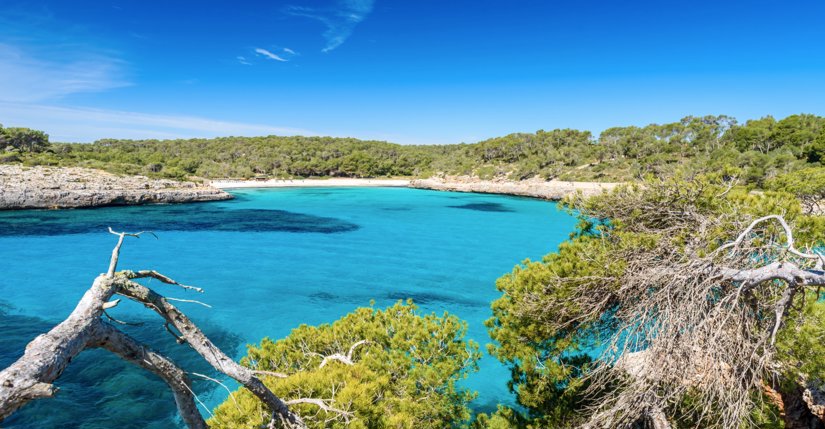 Playing host to many Bachelor and Bachelorette parties or getaways, Mallorca is a very popular destination with a vibrant nightlife.

Santa Catalina and the old town plays host to a number a smaller places open seven days a week and lead in the summer time, Paseo Marítimo leading to the Marina where music can be heard blaring and people flood the streets.

In the southwest region of the island you will find the infamous area known as Magaluf which is the area lined with bars and clubs for those looking to party into the night.

During the Summer Season there are a number of beach resorts as well as festivals and events along the Marina. 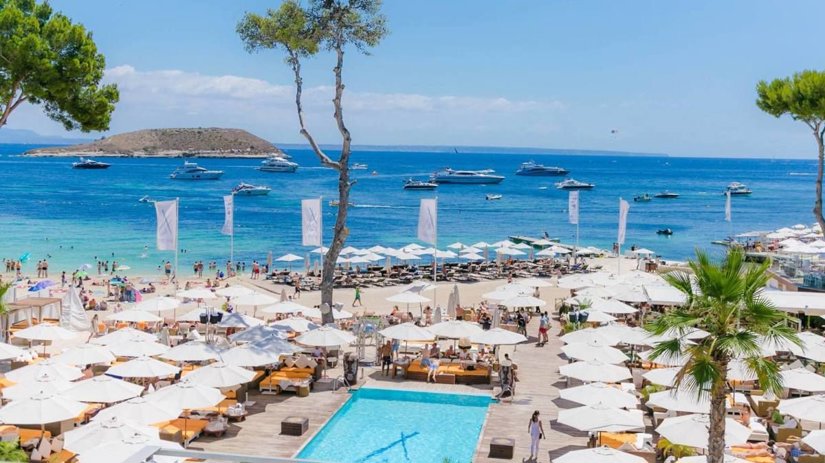 Check availability for fast ferries from Barcelona Palma or from Valencia to Palma. Even traveling between the Balearic islands is easy, look for ferry tickets here.